Ware Brass is a traditional brass band and has been making music in the county of Hertfordshire for over 150 years, and so we are one of the oldest brass bands in the South of England. We are a 1st Section graded band and have a busy schedule of concerts throughout the year.   The band are available to play at public and private functions from parties to weddings, fetes and festivals.   Our standard line up is as a full 25 piece brass band, however we also have a smaller 10 piece ensemble which may be more suitable for your event.    Contact us to discuss your requirements and we will ensure that we provide the right size band and appropriate music for your event.

Ware Brass always welcomes players to rehearsal, whether seeking to join or simply visiting the area and wanting to play with us for the evening. As we are a 2nd Section band, and play relatively challenging music, you will need to be of at least Grade 6-7 standard (ABRSM/Trinity). Rehearsal times and a map of where we rehearse can be found here.

A BRIEF HISTORY OF WARE BRASS:

There is evidence of a brass band or wind band in Ware dating back to the mid 19th Century, However, with the establishment of an association of bands in the London and Home Counties in 1894, this is the date more commonly used as the official formation of the original Ware Band.

It was the with the help of the Cooperative Society, as with many other brass bands, that Ware became an all brass band between the two world wars, and it was the Co-op that financed the first set of uniforms worn by Ware members (in fact, they were the uniforms originally worn by the world famous CWS Manchester Band). Ware flourished throughout the 30s and 40s and this is when they became known as Ware Town Band. From around this time, and for the next twenty or more years, the band was led by the Carter brothers; first elder brother Ernie Carter who was then succeeded by his younger brother Cyril in the 1950s. They were followed, in turn, by Alf Hulls and then Doug Lockerby in the 1960s. 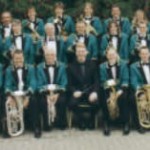 In 2001, the band appointed Kenny Durbin as Musical Director and he led the band to a significant number of successes in both the entertainment and National contest arenas. In the following three years the band was promoted from 4th to 2nd Section.

Phillip Littlemore took on the role of Musical Director with Ware Brass in April 2006. Phillip wanted to concentrate the bands efforts more towards concert-giving and, with the band’s blessing, embarked on that path continuing to entertain the concert-goers of Ware as well as further afield. The Concert Spectaculars performed at the Drill Hall each November are stuff of legend and have included, among many, a 60s Night where everyone was entertained by Elvis, Tom Jones and many other icons of the decade through to their Heroes & Villains Night where audiences came face-to-face with Darth Vader himself. Of course, Phillip and the band also continued to compete in the Regional Championships each March and with Phillip’s musical direction the band was promoted to the 1st Section in January 2014.

In July 2017 Phillip and his family moved to the Isle of Wight, and despite best intentions a 220-mile round trip, not to mention the two ferry crossings as well, made the weekly jaunts to High Cross impossible! Therefore after 11 years of outstanding collaboration it was time for Ware Brass Phillip to part.

In September 2017 Craig Patterson was appointed as Musical Director, and the band continues to concentrate on a programme of concerts and engagements as well as several competitions each year. The band has a well-earned reputation as one of the most outstanding entertainment bands in the South of England.